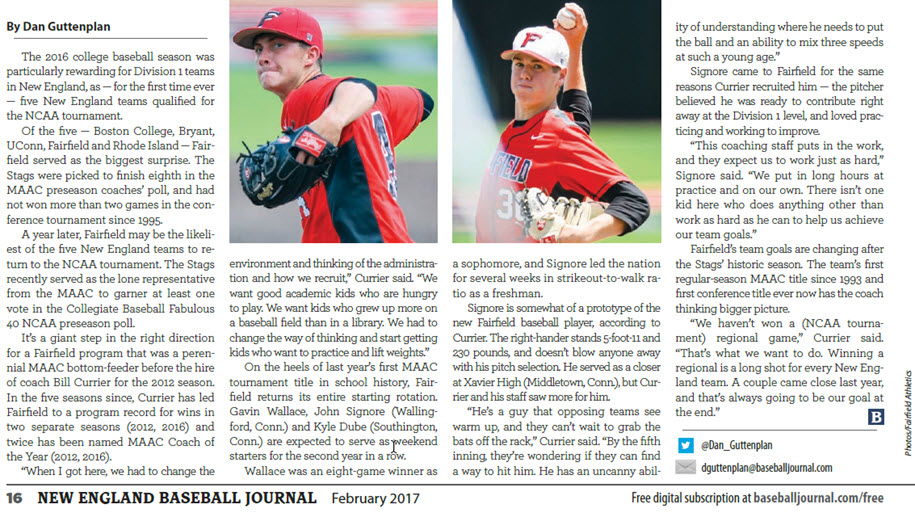 FAIRFIELD RISING Could the Stags — returning their entire rotation from their first tournament team — become New England’s next power? By Dan Guttenplan The 2016 college baseball season was particularly rewarding for Division 1 teams in New England, as — for the first time ever — five New England teams qualified for the NCAA tournament. Of the five — Boston College, Bryant, UConn, Fairfield and Rhode Island — Fairfield served as the biggest surprise. The Stags were picked to finish eighth in the MAAC preseason coaches’ poll, and had not won more than two games in the conference tournament since 1995. A year later, Fairfield may be the likeliest of the five New England teams to return to the NCAA tournament. The Stags recently served as the lone representative from the MAAC to garner at least one vote in the Collegiate Baseball Fabulous 40 NCAA preseason poll. It’s a giant step in the right direction for a Fairfield program that was a perennial MAAC bottom-feeder before the hire of coach Bill Currier for the 2012 season. In the five seasons since, Currier has led Fairfield to a program record for wins in two separate seasons (2012, 2016) and twice has been named MAAC Coach of the Year (2012, 2016). “When I got here, we had to change the environment and thinking of the administration and how we recruit,” Currier said. “We want good academic kids who are hungry to play. We want kids who grew up more on a baseball field than in a library. We had to change the way of thinking and start getting kids who want to practice and lift weights.” On the heels of last year’s first MAAC tournament title in school history, Fairfield returns its entire starting rotation. Gavin Wallace, John Signore (Wallingford, Conn.) and Kyle Dube (Southington, Conn.) are expected to serve as weekend starters for the second year in a row. Wallace was an eight-game winner as a sophomore, and Signore led the nation for several weeks in strikeout-to-walk ratio as a freshman. Signore is somewhat of a prototype of the new Fairfield baseball player, according to Currier. The right-hander stands 5-foot-11 and 230 pounds, and doesn’t blow anyone away with his pitch selection. He served as a closer at Xavier High (Middletown, Conn.), but Currier and his staff saw more for him. “He’s a guy that opposing teams see warm up, and they can’t wait to grab the bats off the rack,” Currier said. “By the fifth inning, they’re wondering if they can find a way to hit him. He has an uncanny ability of understanding where he needs to put the ball and an ability to mix three speeds at such a young age.” Signore came to Fairfield for the same reasons Currier recruited him — the pitcher believed he was ready to contribute right away at the Division 1 level, and loved practicing and working to improve. “This coaching staff puts in the work, and they expect us to work just as hard,” Signore said. “We put in long hours at practice and on our own. There isn’t one kid here who does anything other than work as hard as he can to help us achieve our team goals.” Fairfield’s team goals are changing after the Stags’ historic season. The team’s first regular-season MAAC title since 1993 and first conference title ever now has the coach thinking bigger picture. “We haven’t won a (NCAA tournament) regional game,” Currier said. “That’s what we want to do. Winning a regional is a long shot for every New England team. A couple came close last year, and that’s always